researching the topic for my masters in history

If you have followed my past few prayer letters, you will know that my circumstances have lead me to seek studies in September 2012.  And after much research, looking at every option from Basque studies or culinary school to translation.  But in the back of my mind there was always the desire to research Lourdes, and to understand at a deeper level than what Wikipedia and pop-catholic dogma could tell me.  And so I started researching and reading and that has lead me to the possibility of doing a research masters in history.  I’m in the process of my application, and I am far from being accepted, but part of the application is to propose a thesis topic, I thought I’d share with you what I have found.
Some background 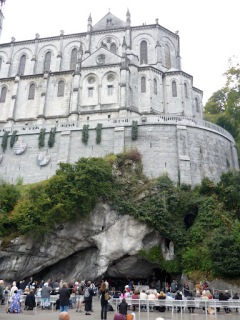 The most significant event in Lourdes history are the 18 apparitions of Mary to Bernadette Soubirous in 1858.  Bernadette, a young shepherd girl, saw a ‘white lady’ in the grotto (cave) of Massabielle just outside of Lourdes.  What is significant in these apparitions is that the lady referred to herself as ‘the immaculate conception’, a title attributed to Mary in Rome 4 years prior.  She also told Bernadette about a spring in the cave that became a source of ‘Holy water’, with many reported healings.  The white lady also requested that a church be built on the site.  There are now 2.  Lourdes is now one of the most visited pilgrim sites in the world, second only to the Vatican in Europe.
Going further back
But if we look further back in the history of the city of Lourdes, there seems some evidence to suggest a very significant event occurred more than a thousand years before the white lady appeared to Bernadette.  In 778AD, Charlemagne was returning from battle in Spain, when he came to Lourdes.  The fortified castle, inhabited by Sarracens, had been beseiged by the Frankish army.   Mirat, the Count of Bagnères (Lourdes was the seat for Bagnères) refused to surrender to any man.  Then, in a bizarre conversion experience involving an eagle dropping a salmon over the walls of the castle and at the feet of Mirat, he converted to Catholicism.  The chaplain of the Frankish army, who was also the Bishop of Le-Puy-en-Velay, convinced Mirat that he did not need to surrender to a man, but he could surrender to the mother of God.  He agreed and was baptised.  He then declared that there would be no stronghold in Lourdes, except for the stronghold of Mary.
Is it any wonder then, that Mary ‘appeared’ in the city that ‘belongs’ to Mary ?
Going deeper
So who was this Bishop chaplain from Puy-en-Velay?  Puy-en-Velay is the town of the first apparitions of Mary in France around 250AD.  Surprisingly (or not) Mary also asked that a church be built on the site of these apparitions.  It seems that wherever Mary appears, she requests that a church be built.  Was this Bishop Mary’s advocate ?  How many other towns ‘surrendered’ to Mary ?  Have there been reported apparitions in those towns since ?  Was Charlemagne conquering Western Europe not only in the name of the church, but especially in the name of Mary ?
But it’s there that my research had hit a road block this past few months.  All the lists of Bishops of Le Puy-en-Velay have an unknown period between 600 and 800AD.  I haven’t even been able to find a name for this Bishop, let alone determine where he travelled, towns he visited and his theology of Mary.
So I went around in circles, looking at the theology of Charlemagne, he plans for the church in France and his associations with the Catholic church in Rome. (He was named the Holy Roman Emperor on 25th December 800AD)  Its clear he was very attached to the Rule of St Benedict, so I started looking at the theology of Benedict, and well, you get my drift, I went off on some tangents !
But then last night (thus my excited status updates on facebook) I had some breakthroughs !  Firstly the term for ‘chaplain’ in the middle ages is different from the current term.  So I started looking up the correct word, which definitely made my research more successful !  Then I found some primary documents that I could access online at the National Library of France.  These documents listed bishops in the ‘unknown’ period, as well as some helpful information about name changes of villages.  It was at this point that I realised I was becoming a geek and that maybe people weren’t quite as excited about this as I was.
Implications
One thing I have been asking the Lord about is : what are the implications of this for the church ?  What does the Lord want me to find?  How do I approach my findings ?  I have my opinions about the apparitions, but I need to remain somewhat neutral in my writing, leaving out what seem to me as the obvious spiritual implications.
Getting into the masters
I’m not actually into the masters course yet!  This could use a lot of prayer.  A bachelor of ministry is not exactly equivalent to a degree in anthropology, archaeology or history, so technically I don’t qualify.  But my ministry degree is completely relevant to what my thesis would be, especially the elements of church history.  God-willing, they will see that.
So there you have a little bit of my latest news, my plans for the upcoming few years.  Research, research, research.  Hopefully the fact that I can spend hours researching ‘for fun’ already is a good sign !

3 thoughts on “"Mary will be the only stronghold in Lourdes"”