Lourdes, situated in the Pyrénées mountains, is in the Hautes Pyrénées department in South West France.   It’s a small rural city, surrounded by farming villages and to its south the Lavedan Valleys are dotted with over 80 mountain villages.  The nearest major city is Toulouse, which is about 2 hours drive.

Those considered to be locals in Lourdes have been living in Lourdes for many generations.  That is why even French people living in the area for decades still say they feel like foreigners.  In this way, Lourdes (and its surrounding villages) are hard communities to integrate.  Lourdes has all the necessary amenities: supermarkets, schools, parks, a lake, a small hospital and a train station. 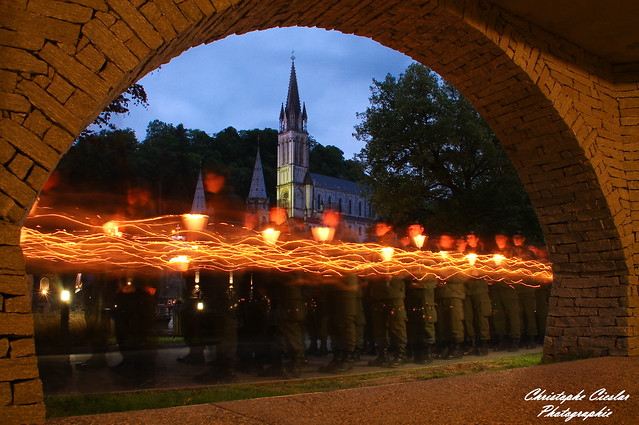 But what makes Lourdes famous is not its amazing access to mountains and ski stations, but its Catholic pilgrimage trade.  For 160 years, since 1858 when Bernadette Soubirous is said to have seen the Virgin Mary 18 times (check out the wikipedia article), pilgrims have flocked here by the millions to ask Mary to heal them and to wash in the famous (and some say miraculous) Holy Water.  That’s why Lourdes, has more hotels per capita than any other city in France (except Paris), and why there are around 200 religious souvenir shops and dozens of religious communities (convents and monasteries) in such a small city.

Being in France, the main language is obviously French, but due to the past 150 years, there has been a significant Portuguese population that has emigrated here.  And in the pilgrimage season, which runs from Palm Sunday to All Saints’ Day (1st November), Lourdes sees a massive influx of Spanish-speaking, Italian and Portuguese-speaking pilgrims.

Another group of people, new to Lourdes are refugees.  At the request of the French government, Lourdes opened an Asylum Seeker Centre (CADA), which hosts 90 asylum seekers while they go through the process of getting legal status as a refugee.  From the Middle East, Africa, Eastern European countries, asylum seekers are treated with particular caution by locals.

There was an error retrieving images from Instagram. An attempt will be remade in a few minutes.